Even if you don’t follow entertainment news, chances are you’ve heard about comedian Katt Williams’ tirade against fellow comedian Tiffany Haddish, questioning the meteoric rise of the Girls Trip star over more tenured black women comedians. He’s not the first to be critical of the recent Emmy Award-winning Haddish. Others have argued that she reinforces negative stereotypes or that she simply isn’t funny.

What is it about Tiffany Haddish, Kevin Hart and Lil Rel Howery – all dissed by Katt Williams – that allows them to tap into levels of success alluding their arguably funnier predecessors? All three are high rolling in the currency of likability.

For starters, it’s not about intentionally competing in a popularity contest. It’s about genuinely being the type of 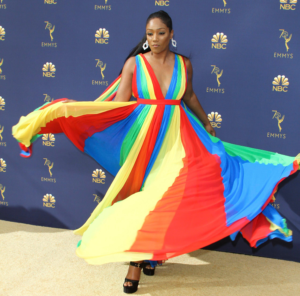 Tiffany Haddish at the 2018 Emmy Awards

person that others want to be around. Even if you consider yourself an introvert, humans are hard-wired to be relational. People who rank high in likability often possess the ability to break down barriers and authentically connect. We want them on our teams. We preferentially patronize their businesses. They’re top of mind when it comes to new opportunities or referrals – even over people who may be more qualified.

If you read other articles on improving your likability, you’ll often see a focus on tactics like remembering names and smiling, but likability runs deeper than this. It gets to the root of your character and the way you express it in the company of others.

In my experience teaching workshops on personal branding for corporations and professional organizations for more than a decade, here’s a common attitude I see among people low in likability: “I don’t go to work to make friends.”

That may be true, but the wall you’ve constructed between you and your colleagues may also be the barrier between you and the opportunities you’ve been after. Does that mean you have to go to Happy Hour with your co-workers? No, but it does mean being willing to demonstrate and embrace the characteristics that make us human – not just worker bots. Because likability is currency, the more you have, the more doors you’ll find opening for you.

Mentioned in the show: Platform for Purpose Incubator

How to be more likable

Here are five practical principles that can help you to build more likability currency, even if you don’t consider yourself outgoing or charismatic:

Likability isn’t about being the funniest or most intriguing person in the room. It’s about genuinely caring about people – and acting in a way that demonstrates it at every opportunity.

Tired of being the underdog?
Get off the ropes and win being you!

In this motivational personal strategy guide, Life and Business Coach Isha Cogborn will show you how to: